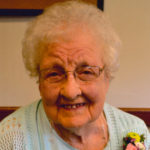 Wilma Wynia was born April 6, 1926, in Rock Valley, the daughter of William and Jennie (Vugteveen) Wynia.

On Feb. 18, 1948, she married Sam Altena. They made their home on a farm southwest of George. Upon retiring in 2008, the couple moved to an apartment in George. Her husband died Jan. 10, 2012. She moved to Aspen Heights in Hull, Iowa, and later the Good Samaritan Society in George.

She was preceded in death by her parents; husband; daughter, Lorna Altena, and son-in-law, Ron Healy.