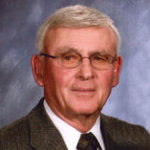 William R. Rens was born Jan. 3, 1937, in Hull, Iowa, son of Richard and Helen (Wassink) Rens. He grew up northwest Iowa and attended different country schools as well as Western Christian High School. After leaving high school, he worked for his uncle as a carpenter. In 1959, he was drafted into the U.S. Army and served two years then was recalled until 1962.

On Oct. 26, 1961, he married Joan Vreeman. The couple lived in Tacoma, Washington, one year while he finished his Army service then settled in Sioux Center. In 1963, he started Rens Construction. He retired in 2002.

He was preceded in death by his parents; a grandson; his sister, Hattie Vander Plaats, and brothers-in-law and sisters-in-law.