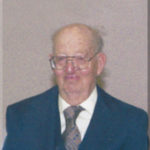 Louis Herman Hubner was born April 14, 1923, in Pipestone County, Minnesota, to Herman and Emma (Mettenbrink) Hubner. He attended country school through eighth grade and and graduated from Pipestone High School in 1942. He lived and worked on the family farm.

He was preceded in death by a granddaughter, his parents and one brother, Loren Hubner.