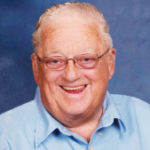 Gary Dean was born Nov. 10, 1938, in rural Orange City, Iowa, the son of Jacob and Henrietta (Hofland) Mars. He was raised at Middleburg and graduated from Rock Valley Christian School. He first worked for area farmers, then moved to Michigan where he was employed at Keeler Brass for 1 ½one and one-half years. After moving to Orange City, he worked for Hi-Precision one and one-half years.

On Dec. 16, 1960, he married Hendrene Joan Zoet. Since 1963, they have farmed northeast of Hull. He was a member of the board of directors of the Hull Christian School.

In addition to his parents, he was preceded in death by two brothers, Lige Mars and Jerry (Sandie) Mars; three sisters, Gertrude Vande Brake, June (Clarence) De Vos and Shirley Beth Mars, in infancy; a brother-in-law, Fred Falkena, and a sister-in-law, Debbie Mars.