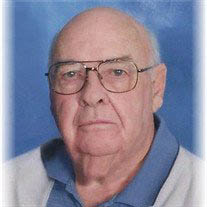 Dale Merrill was born Nov. 11, 1932, in Sheldon, son of Freeman and Vera (Shaffer) Merrill. He grew up in Sheldon and graduated in 1950 from Sheldon High School. After high school, he was employed by Metz Baking Co.

On Aug. 25, 1950, he married Dorothy Houtsma. They lived in Boyden, Iowa, a few years and then moved to Sheldon. Throughout his career, he worked for Smit and Sons, Tri-State Livestock and Marv Donkersloot. He was also a Sheldon city councilman many years.

He was preceded in death by a son, Bob Merrill; parents; brother and sister-in-law, Freeman and Virginia Merrill, and sister, Chevier Miller.