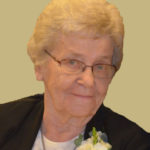 On Sept. 30, 1955, she married A. Richard Wallenburg. The couple made their home in Rock Valley. She was a bus driver for Rock Valley Community School and worked several years at Walmart.

She was preceded in death by her parents; her husband; an infant brother; brothers, John, Elmer and Fred Ymker; brother-in-law, Cornie Van De Vendel, and sister-in-law, Joanne Ymker.