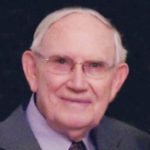 On May 22, 2004, he married Harriet De Groot Hulstein. The couple made their home in Hull until 2015 when they moved to the Landsmeer Ridge Retirement Community in Orange City. On April 5, 2019, he became a resident of Pleasant Acres Care Center in Hull.

He served as president of the Northwest REC board and as a board member of Wester Christian High School in Hull.

He was preceded in death by his parents; first wife; three brothers, Albert and his wife, Eleanor Kroese, Hilmore Kroese and Irvin Kroese; and a brother-in-law, Ken Ludema.