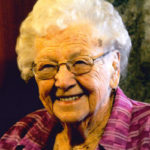 On Aug. 26, 1937, she married Bernard Mouw. They farmed near Sioux Center. In 1948, the couple moved to a farm near Boyden. In 1975 they retired and moved into Boyden. She worked as a nurse aide over 10 years, then worked as a volunteer for hospice. Her husband passed away in 1988. In January 1990 she moved to Sioux Center. She eventually moved to Crowne Point and onto Royale Meadows.

She was preceded in death by her parents; husband; daughter, Norma Muilenburg; son-in-law, Dean Franke; granddaughter; two great-grandchildren and granddaughter-in-law.