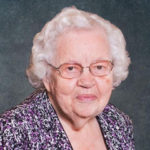 On Jan. 11, 1950, she married Gilbert Schelling.  They made their home on a farm near Hudson, South Dakota, before moving to a farm near Sioux Center.

She was preceded in death by her parents; brothers, Jim and Wayne Vander Schaaf; brothers-in-law, Bud Vander Broek and Ed Zomermaand; and sister-in-law, Elda Vander Schaaf.