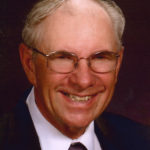 Ladell Gale Kaster was born June 25, 1943, in Rock Rapids, Iowa, son of Herman and Lillian (Techen) Kaster. He grew up on the family farm north of Hull and graduated from Boyden-Hull High School. Following school, he served in the U.S. Navy as a radioman during the Vietnam War.

On Oct. 4, 1968, he married Anna Marie Fluit. The couple made their home north of Hull where they farmed and raised their five children.

He was preceded in death by his parents; infant son, Harvey; and infant grandson.