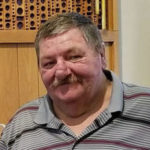 Henry was born Nov. 24, 1954, in Rock Rapids, Iowa, son of Case and Alice (Flier) Van Der Brink. He grew up near Hull, Iowa, before moving to Boyden, Iowa. He graduated from Boyden Hull High School in 1973.

On Dec. 12, 1973, he married Brenda Den Hartog. They made their home in Boyden 41 years before moving to George in 2015. He was a lifelong truck driver, working for various trucking companies, with his most recent employment at Te Slaa Trucking.

He was preceded in death by his parents and his father and mother-in-law, Bob and Alvina Den Hartog.