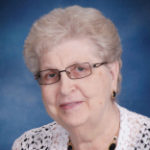 Marylin Joann Vanden Brink was born August 15, 1939, near Sheldon, Iowa, the daughter of Wynard and Marie (Kleinwolterink) Vanden Brink. She was raised in Archer and Hospers, Iowa, where she attended Archer and Hospers public schools. After graduation, she worked as a telephone operator and repair clerk for Northwest Bell Telephone Co.
On April 5, 1961, she married Gerrit Van Der Zwaag at the First Presbyterian Church. They made their home in Hull where she was a bookkeeper and dispatcher, first for Gerrit’s corn shelling business, and then additionally for Van Der Zwaag Trucking.

She was a member of the First Reformed Church, where she participated as an officer in church circles. She was also a member of Gideons Northwest Camp Auxiliary and Hope Haven Auxiliary, serving as an officer for both. She volunteered at Pleasant Acres Care Center in Hull.