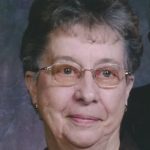 Louise Sohl was born Oct. 5, 1930, in Doon, Iowa, to John and Else (Zorn) Sohl. She grew up in Doon and attended Doon High School.

On Jan. 11, 1950, she married Donald Schemmel at Hull, Iowa. The couple made their home in Colorado then returned to northwest Iowa to farm and lastly retired to Dexter. She worked at Good Samaritan Home in George, Iowa, before working at the high school in George as the food service director. She later worked as the food service director at Stuart and Waukee High schools.

She was preceded in death by her parents; her brothers, Arnold Sohl and Dwayne Sohl, and her sister-in-law, Wilma and husband, John Grier.