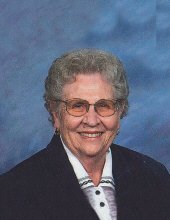 Leora Jean Erkes was born Aug. 20, 1922, in Sheldon, the daughter of Herman and Kathryn (Sinema) Erkes. She received her education in Sheldon and graduated from Sheldon High School.

On Oct. 24, 1941, she married Gerald Koele. The couple operated feed, produce and a hatchery business in both Hull and Sheldon. They later operated the Montgomery Ward Catalog Store in Sheldon. Her husband passed away Dec. 9, 1992. After her husband’s passing, she remained in the family home until moving to Christian Retirement Home in Sheldon, later living at Fieldcrest for a couple years. Since March 2017, she had been a resident of the Prairie View Retirement Home.

She was preceded in death by her husband, a grandson, her parents and a sister and her husband, Vera and Ralph Kamphoff.