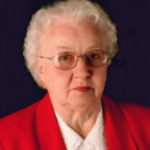 On Nov. 4, 1982, she married Andrew Scholten. The couple made their home in Hull, Iowa. He passed away July 19, 1999. Following his death, she returned to Rock Valley. She worked for Hope Haven in the Riverview Group Home.

She was preceded in death by her parents; husbands; brothers, Ralph, Evert, Ben Bert and Harold Voetberg in infancy; and sisters, Hatti, Rosie, Margaret and Johanna.