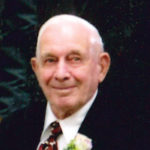 Adrian Van Hofwegen was born Nov. 16, 1923, in Hawarden, Iowa, to Dick and Cora (Faber) Van Hofwegen. He grew up and attended country school near Lebanon, Iowa. He enlisted in the U.S. Coast Artillery Corps. He was united in marriage to Ellen Cuperus. He farmed and milked cows near Colton, South Dakota. In the mid-1970s, he moved to Artesia, California, where he started a lawn mowing business. He later moved back to Sioux Center to retire.

He was preceded in death by his parents; son, Pete; a granddaughter; son-in-law, Eldon De Wild; brothers, Marinus and Bill, and sisters, Kryna Rozeboom and Liz Fluit.