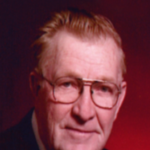 Gilbert Schelling was born July 29, 1928, in Sioux County, Iowa, to Rochus and Jennie (Harskamp) Schelling. He grew up on a farm and attended country school. After his education he worked for area farmers as a hired hand.

On Jan. 11, 1950 he married Wilma Vander Schaaf. They made their home on a farm near Hudson, South Dakota, before moving to a farm near Sioux Center.