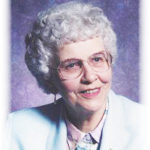 On May 5, 1947, she married Bert Engelsman. They lived in Boyden, Iowa, 43 years where they owned and operated a repair shop. Her husband passed away in 1991. She moved to Sheldon where she volunteered at Oak Park Care Center several years. She lived at Christian Retirement Home 10 years and then moved to Sanford Sheldon Care Center.

Survivors include her son, Danny (Cathy) Engelsman of Sheldon; four grandchildren and 12 great-grandchildren.